I wrote this along side with a few family members as a family history. The SD CowBelles Group started a collection of family stories stating how they became involved in ranching industry. Here is my family's long stroy!

This is my first posting of CowPoke “Chronicles.” I wanted to start off by writing about my family, The Cauzza’s. Without turning this into a novel, I am going to share our family history and how we became a well-known cattle family in San Diego County. It all began with the Moretti family, our cousins, voyaging to the new world to start a fresh beginning. The Moretti and Cauzza families originated in a small town called Cevio, which rests in a narrow valley surrounded by the beautiful, majestic Alps mountain range in southern Switzerland. At the time, the border to Italy was shut down and the Swiss people in that region suffered economically. Therefore, the people who were affected searched for another way of life to thrive.

Florenzo Moretti was the first to travel to the US in 1888 at 18 years old. Florenzo had five siblings, Philip Moretti, Felix Moretti, Ida Cauzza, Olympia Morelli and Vittoria Franci. Florenzo traveled back to Switzerland to marry Emelinda, “ Linda “ in 1907 and brought back his brother Felix. Felix traveled back to Cevio to marry his sweetheart and was shocked when she had already married another man. He then married Ernesta, and when the newlyweds decided to travel back to the US, they brought cousin Victor Cauzza with them on a boat in 1921.

Victor was the first in the Cauzza family to make it to the US. He said he would never forget the first night he stayed with his “new” family because his cousin, Auggie Moretti was born in the house that night, that stills stands on the Mesa Chiquita Ranch in Mesa Grande. Victor had two other brothers, Albino and Elmo. Albino ventured to the United States a year later (1922). Albino was 15 years old. Elmo was the last Cauzza brother to arrive at 16 years old in 1927. All three Cauzza brothers traveled overseas through Ellis Island to help their cousins in Southern California on the Dairy ranches. They wanted to learn the ways of the New World and make something of themselves. Some of the siblings and cousins had never met each other before traveling overseas. Think of how frightening it would have been to travel to a different country, speaking a different language, and living with people who are blood relatives that you have never met before. Bravery and a passion to start a new beginning made these people into strong and well- respected individuals.

Albino Cauzza married Lillian Traverso and they resided in Mesa Grande on the Mesa Chiquita Ranch. They had three sons, Philip (Sonny) Cauzza, Richard (Dickie) Cauzza, and Albert (Tino) Cauzza. The 3 brothers, Albino, Victor and Elmo Cauzza helped on the Dairies, but they are also the ones who got started raising beef cattle on the Mesa Chiquita Ranch which became the Cauzza Brother’s Cattle Company. It eventually grew to the Julian Ranch which the 3 brothers bought and leased property in Ramona and Camp Pendleton in Fallbrook, Ca. The oldest brother , Victor remained as the bookkeeper and manager of the Santa Ysabel Ranch which operated the dairy and Albino and Elmo Cauzza concentrated on the beef business. Albino became very sick, so traveled back to Switzerland with his family in 1949. He died a year later, 1950 in Cevio, Switzerland leaving his wife and 3 young sons, Philip (13), Richard (8,) and Albert (4.) Lillian traveled back to the US with her three sons to help Elmo take care of the Cauzza Brother’s Beef Company and ranch in Julian. Victor, (brother to Albino) married Lillian (Albino’s widow) in 1956. It was the cultural norm for the oldest unmarried brother to marry his brother’s widow. It was thought of as a responsibility, especially since there were children involved. Victor and Lillian and her 3 sons moved to the Santa Ysabel Ranch once they were married. He adopted his nephews and continued to help them learn the ranching business. Victor was a very community minded leader by nature. He sat on the Julian Union High School Board , the Water Conservancy Board, The Farm Bureau. and Cattlemen’s Association. He also was a big supporter of the Santa Ysabel Mission which shared the valley with the ranch and dairy.

Emelinda, “Linda,” Moretti’s husband, Florenzo, died in 1926. Linda never had any surviving children. Therefore, she looked to family members to keep the ranch operating appropriately. There were three men she worked with the most. Marco Moretti, Jacob Fiegel and Victor Cauzza. Victor was the head accountant and was very loyal to Linda. This close friendship led Victor to have a lot of responsibility at the Santa Ysabel Ranch. He became the manager of Santa Ysabel Ranch and Mesa Chiquita Ranch when Linda passed away in 1955.

Elmo Cauzza, the youngest brother, was an out-going fun loving guy who loved making and drinking his precious wine at the ranch in Julian. He was married to Alice Ann who had a daughter from a previous marriage, Nova Jo Ostrander. Nova Jo had 2 sons, Marlin and Elmo (Bubby) Ostrander. These two boys became step-grandchildren to Elmo. Elmo and Alice Ann had one daughter together, Patricia , who had 2 sons, Justin and Ryan, and resides in Washington with her husband Jim Ingalls and her grandchildren. Elmo had passed away after church one Sunday. He was telling one of his jokes and had a heart attack in a home on Main St in Julian in 1982. After Elmo passed, Alice Ann sold their property in Julian and spent part of her life in Montana with daughter Nova Jo and sister Dusty as well as Washington with her second daughter Patricia.

Richard “Dickie” Cauzza was killed in a car accident in 1965.He had attended Cal Poly and graduated with a degree in Ag Business when he was drafted into the army as an officer. He was a Lt. in the Army and he was stationed just below San Francisco. He and two other officers were driving down the coast on Highway 1 near Big Sur, California returning from a conference when a car came around a blind curve and hit them head on. Dickie and one other officer died on impact. The other officer was left handicapped and in a wheelchair for the rest of his life.

As time passed, the next generation of the Cauzza Family became part of the tradition of ranching in the Santa Ysabel Valley..

Philip, “Sonny “, Cauzza was married to Nadine Handley in 1959 and they had four children; Adam, Lucinda (Cindy), Victor (Bud) and John. Sonny was put in charge of the Mesa Chiquita Ranch. He raised both dairy and beef for a long time. However, in 1999 the cost of keeping a small dairy in business became too costly. He sold all of the dairy cows, bought a ranch in New Mexico and focused on his beef cattle business. Sonny’s dream was to always own land out of state, preferably somewhere were there was good hunting as well. So, he naturally fell in love with a small town in western New Mexico called Quemado, where big elk roamed with the cattle. He brought over his youngest son, John and his family to help him on this new ranch. Sonny had his eldest son, Adam, take care of the Julian, Santa Ysabel, and Mesa Chiquita properties and cattle. Sonny was a big supporter of the local 4-H and FFA Clubs encouraging kids to be involved in agriculture. Sonny and Nadine traveled back and forth to manage both the New Mexico Ranch and the California Ranches. Nadine loved horses. She taught all of her grandchildren to ride and it was a goal of hers to have a foal for each grandchild that was bred on the ranch. She enjoyed to ride with her Saddle Sorority Club in many beautiful locations. Nadine passed away surprisingly from Hepatitis C in 2005. Sonny had lost the love of his live but continued traveling back and forth between New Mexico and California. Sonny was diagnosed with Lymphoma and had passed away in 2010 to join his Nadine in heaven. Currently, Sonny and Nadine’s children are still raising beef locally in San Diego county, as well as in New Mexico, with some of their grandchildren and great-grandchildren keeping up the tradition.

In 1991, after Victor’s death, Albert “Tino” Cauzza was put in charge of the Santa Ysabel Ranch which managed a dairy and beef business, Tino married Kathy Dalton in 1982. They had two sons, Jarod and Ryan. When Tino was put in charge of the Santa Ysabel Dairy he found that the dairy that had been successful for so many years , was no longer able to keep up with the rising costs put upon it by California laws and regulations and expenses. He concentrated on the beef end of the business . He began utilizing the fields that had once grown crops by rotating the cattle to take advantage of its nourishing feed at peak times of the year. He loved the ranching life he had been born into but knew times were changing and he needed to try new ways of making the ranch more profitable. He encouraged his sons to earn a higher education to be able to keep up with the new laws that were forever changing . Jarod, the oldest, earned a Law degree and Ryan, the youngest, earned a degree in Business. Tino was a very well known man in the community. Kathy taught at the elementary school in Julian for 32 years and Tino was always willing to help with whatever the “kids” needed. He had been a basketball and baseball standout while he attended the Julian schools and so became a big supporter and coach to all the kids in Julian while his sons participated. In 2006 he had an injury to his knee caused by a “testy bull” and he battled Soft Tissue Sarcoma for the next 3 years losing his battle in 2009. His sons, Jarod and Ryan, are now slowly restoring the 100 year old ranch and beef business back to life using what their education has taught them and introducing their children, the 3rd generation, to the traditions of ranching life.

The Cauzza Family feels privileged to be a part of in California Ranching History. It is my goal to write this to teach our children the history so it will not be lost. I believe it is important for them to know where they come from, to know the value of being hard working individuals and to continue promoting the beef industry as their ancestors did. I learned a lot and had fun writing this and talking/collaborating with several sources. Please, pass this along to family members to share with their little families! I have included photos of the kiddos who belong to the Cauzza CowBelle members.

Written by Allison Fender with the help and words of Katy Moretti, Kathy Cauzza and Adam Cauzza. 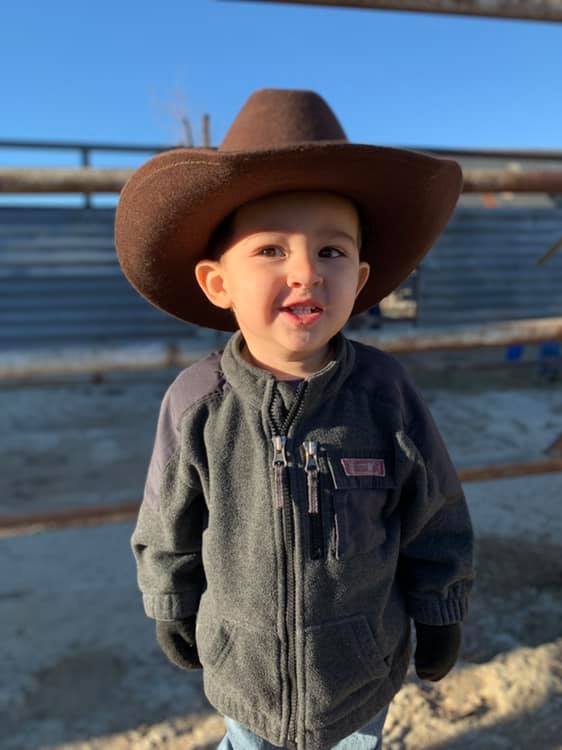 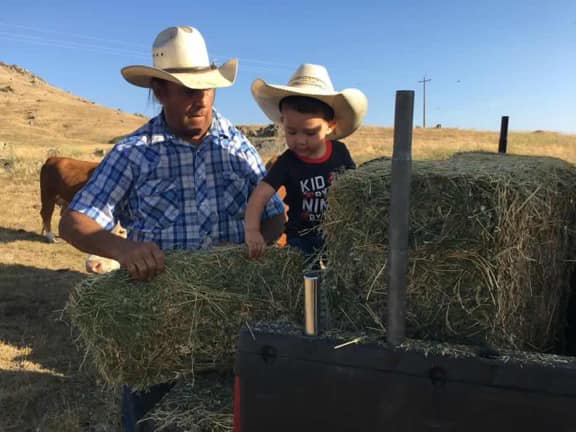